We are thrilled to introduce the Best Menswear Giveaway of 2017 featuring five brands to know. It’s time to meet the brands and the prizes. 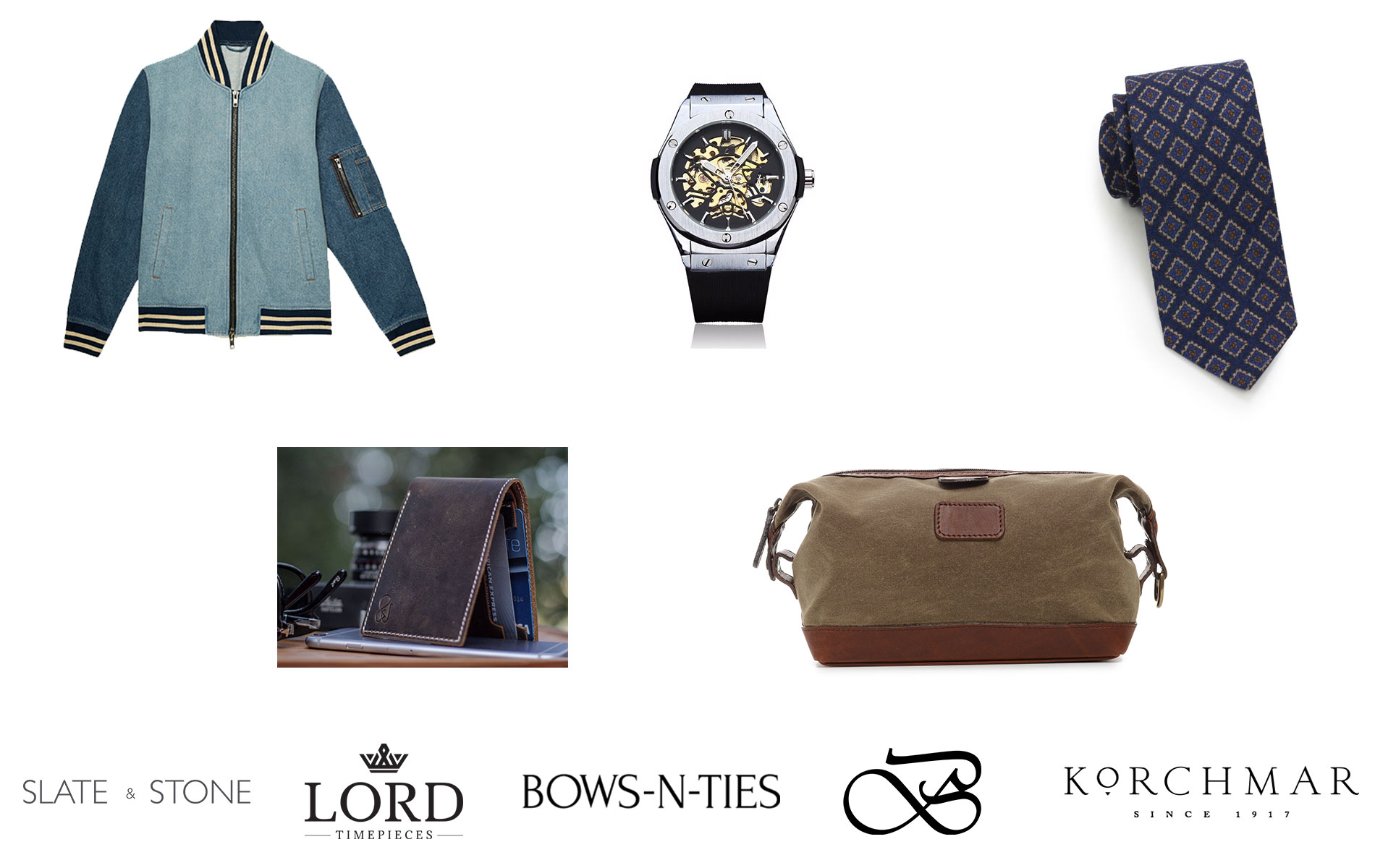 Slate + Stone is brand to bookmark! Their vision is straight to the point:  to create collections focusing on quality construction, rich textures and transitional pieces with uncompromising standards. Trust us, they hit it out of the park. The winner for our menswear giveaway will win their Denim Bomber Jacket which is a nod to classic Americana. The bomber jacket is crafted from a mix of denim in washed indigo hues and has collegiate-style ribbed trims.  It has a  mix of pockets on the upper arm for a utilitarian touch.

Lord Timepieces is one of the fastest growing watch brands in the world and when you see their watches you’ll understand why. The winner of this giveaway will win their Silver Stainless Bolt Watch. This cutting edge style is sure to become your must coveted and complimented timepiece.

Meet Baurdi. This wallet brand is all about tradition, pride and cowhide. You can tell a lot about a man from this wallet and Baurdi embraces that. They are giving away their Admiral Mocha Wallet  which is the  best of the best. This slim wallet  has a timeless design and  the attention to detail to make it stand out from the rest.

Korchmar is a family-owned brand rooted in excellence that makes quality leather briefcases, travel bags and accessories for business professionals.  Their craftsmanship is impeccable and their signature designs are a must have. The winner of the giveaway will win their Ryder Dopp Kit made from waxed cotton.

Bows-N-Ties is all about creating a wide range of menswear accessories for all aesthetics at great price points. We have a wide range of winter ties made from wools that are great for February fashion. We are giving away a $200 gift card to our store and recommend checking out our Wool Tie Collection.

Stumped on what to get you Valentine this year? We got you covered. We asked our stylist to create a collection of gifts for men who love style and fashion. These ten gifts, he guarantees, are sure to make your Valentine swoon. Each of these items celebrates craftsmanship, menswear and style. We also created a Valentine’s Pinterest Board with more gift ideas in case you don’t see what you’re looking for.  Treat your lucky loved one to fashionable accessories that make him feel special every single day.

“Knowledge is power. Moustache is king.”

Perhaps you’re seeing more mustaches this week than ever. That’s because it’s officially day five of Movember, the hairiest month of the year.  In fact there’s even a Movember Foundation.  We wanted to do our part and spread the word about Movember with this Stache Stylish Infographic.

Like most brilliant ideas, Movember began as a bet between buddies at a bar. Travis Garone and Luke Slattery started Movember in Australia in 2003 and have transformed and shaped it into a global phenomenon in Australia, Austria, Belgium, Canada, Czech Republic, Denmark, Finland, France, Hong Kong, Germany, Ireland, Netherlands, New Zealand, Norway, Singapore, South Africa, Spain, Sweden, Switzerland, UK and USA. 4,746,905 mustaches have been grown, $649 million dollars have been raised and 832 men’s health projects have been funded.

Are you as impressed as we are? Share this Movember Infographic and help build the buzz.

We’re in Como, Italy and we need your help. We’re surrounded by some of the world’s greatest textiles and we want your opinion. What’s your favorite Paisley Pattern?

We want to bring the best Italian fabrics to you for 2016. Paisleys are an iconic menswear pattern and we want to immortalize that by selecting beautifully crafted and designed textiles that our Bows-N-Ties supporters will swoon over. Our buyers, with your help, are adamant about curating our best collection ever of menswear accessories ever including ties, bow ties and pocket squares.  Help us by giving us your input and your VOTE!

Greetings from Como, Italy. Time has come again to pick out fabrics for our 2016 collections. Somewhat overwhelmed by so many fantastic new designs, our buyers need your input. Over the next few days we will be asking you for help. We want your input! Vote for your favorite design above! We will produce the top 3 in 5 different colors ways as neckties as well as self-tied bow ties.

After meeting several Italian fabric mills that specialize in textile designs for men’s ties, we noticed a couple new trends that we are excited to bring to the US market for 2016. Classic prints on coarse wool fabrics where evident in every designer’s collection. Most of these were vintage paisleys and big medallion prints from the 50s and 60s. These old designs were revamped with a new contemporary color palette of bright blues, rich greens, as well as a wide array of spice colors for the Fall/Winter. Also new are so called “gum prints” which are very unique silk fabrics that are first piece dyed in one single color, and then overprinted using a digital fabric printer. The result is a velvet like silk that has an unusual rubbery texture and matte sheen. Last but not least is the resurgence of classic regimental stripes. Stay tuned for an all new regimental collection here at Bows-N-Ties that will be available early April 2016.