A word that comes to mind when we think of Spring is cleaning! Keeping the spirit of spring cleaning alive, we’ve decided to tailor a menswear guide specific to the changing weather of Spring!

It’s time to put your Fall and Winter pieces away for the warmer months of Spring and Summer. We know it’s hard, but put away the wool.

However, keep in mind that some pieces may work for a chic spring look. If you have any neutral linens or a favorite pair of chinos, feel free to leave them in the keep pile.

This guide was meant to keep you from sweating the small stuff, both figurative and literally.

A few of our favorite Spring neckties can be found below:

How to Put Together an Ensemble with a Pin Stripe Suit

The pinstripe suit is a style piece that has been around for many years. It has made its way back and forth into the limelight. We personally adore the look that is created when pairing this classic design with a handsome necktie and a beautiful navy hue. The brighter shade of blue makes for a sunnier look and can pair easily with whatever you’re looking to wear with it. You can even break up the pieces of this suit and create multiple classic or casual looks. You know you’re going to want to add this versatile look to your wardrobe. You can find the items in this look created by @commandmentsofstyle below:

Every person needs to know how to accessorize a classic knit tie, especially when they are the perfect item to elevate your Autumn wardrobe. You’ll honestly be surprised by the looks you can create by adding a simple texture to your favorite accessory. @dapperprofessional has created the ideal look featuring a comforting blue knit tie. His use of blues and red really allows the tie to hold its own, while also combining with other accessories flawlessly. If you’re hoping to recreate this dapper look follow the links below for each of these items.

How to Wear Rose Pink 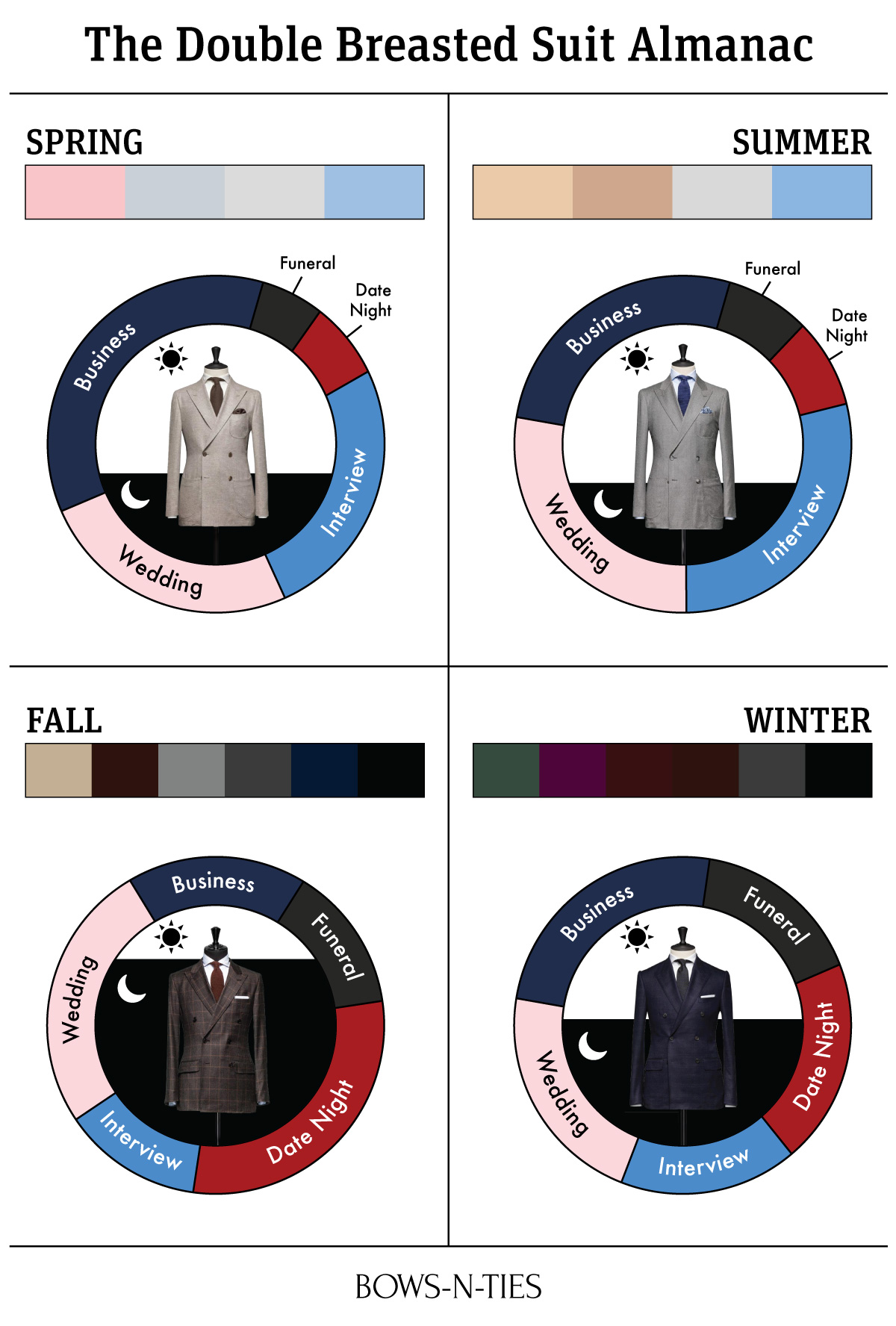 The traditional double-breasted suit incorporates a six by two button design along the front of the suit. These buttons are formulated in neat columns creating a flawless way to elevate your casual look.

Know When to Wear a DB Suit

Know all the acceptable events and times to wear your classic Double Breasted Suit. The polished look is literally timeless in its fit and color palette.  When choosing to wear a double-breasted suit you’ll need to make sure you’re wearing it for the perfect occasion. This look has the ability to be the ideal ensemble for a day of important office meetings and easily transitions into celebratory after-work drinks.

Dear Gentleman, the women have weighed in all the Do’s and Don’ts of Menswear for 2017. Find out what you’re doing right and what you’re doing wrong in the eyes of 1000 single women who shared their top menswear grievances. They didn’t pull any punches. Here are the Top 12 Don’ts and respectively -Dos.

EWW. This is no surprise. Dental hygiene is deal maker or a deal breaker. The number one offender: Beer Breath.

First impressions come from first glance and women HATE bad grooming. That includes bad shaving, cuts, and ill advised mustache choices. And here’s another thing we learned. We as men like our beards much more than they do.

#3 – Poor Fitting Clothes
FIT. COUNTS.  Don’t try to go with anything too tight or too loose. Women want it just right. And before you get reactionary, just think, you don’t want to see them in super loose clothing either.

#4 – Athletic Sunglasses With Suits
Sunglass brands are a dime a dozen so make sure you don’t over utilize your sporty sunglasses. Keep a classically designed pair on hand. We have to agree with the ladies on this one. It’s hard to take those racing sunglasses seriously in the boardroom.

#5 – Ugg Boots
Don’t wear slippers outside of a 5 feet proximity of your home and that counts for UGGs which are essentially just that – high top slippers. The only exception (and this is not universally agreed upon) is the ski lodge.

#6 – Too Much Cologne
Smell ya later. Don’t overdo it on the smell. It’s guaranteed to backfire in more ways than one. The ladies are going to HATE it and some even claimed too much cologne makes them physically sick. When it comes to scent, subtle wins.

#7 – Gaudy Jeans
This got a resounding: NOOOOOOOOOO! from everyone. Simplicity is your only answer when it comes to your bum in denim. Don’t try to up your game with diamonds, embroidery or screen-printed wings.

#8 – Tennis Socks With Suits
Think no one’s looking at your feet? Guess again. Apparently, there’s a piece of motherly advice passed down from generation to generation telling daughters that looking at a man’s shoes can tell them a lot. They didn’t divulge much more but said, white socks and a suit is like seeing a wolf in sheep’s clothing.

#9 – Wrinkled Clothes
Strike while the iron is hot is a saying for a reason. Women want it smooth. We’ve all been there, we want to wear our favorite shirt that’s almost dry but were out of time and try to rock the wrinkle and the dampness. The vote is in, you’re better off with a less favorite, less wrinkled option.

#10 – Sneakers With Dressed Pants
Women universally said this is a bad idea. The mens’ magazines suggest it’s a good idea but women say it’s better in theory than in practice. In real life, sneakers don’t cut it with dressed pants.

#11 – Overstuffed Wallets
It’s time to clean house. That means you need to consolidate all your crumbled one dollar bills, all those loyalty brand credit cards you don’t use and all the business cards from last year. Give yourself a catchall drawer for those things and keep a minimized wallet with the necessities.

#12 – Pattern Overload
See a theme? Less is more. Pattern is the same as cologne, don’t overdue. Too much pattern mixing is a big turn off according to our poll. Stick to the rule of one statement pattern paired with all solids. It’s the safe bet.