The History of the Cummerbund in Men’s Fashion 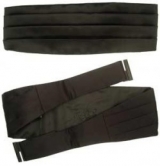 So, first off, the proper spelling for this garment is ‘cummerbund’; not ‘cumberbund’. I know. I was surprised too. As a fashion accessory, the cummerbund and I have a mild history together. I was in the school band back in high school, and our concert tuxes came with cummerbunds. At the time, I remember one of my band mates telling me to be sure to tie it around my person with the pleats facing up. Why would this be, I wondered? Why up? What possible use could that have? And, I remember being told that in the old days, the pleats were meant to catch crumbs from falling into one’s pant’s waistband. That has to be made up, I thought. It’s too ridiculous. To catch crumbs, of all things? Please. But, from then on, I made sure to keep my pleats up. The real joke, is that all of this turns out to be true.

Imagine that you’re a British military officer stationed in India in the 1850’s. These were the days when black tie attire was mandatory for a dinner occasion. And, in colonial India, with no one really to fight, there were many of them I imagine; dinner occasions, that is. ‘Black tie’, of course, means a full three-piece tuxedo, with a waist coat and double breasted dinner jacket. That’s a lot of clothing to wear in a tropical climate, and the British officers, not being wholly foolish, opted to leave their waist coats (a fancy British term for ‘vest’) out of the equation. Instead, they began to adopt a sort of sash accessory worn by Indian men; the ‘kamarband’. The kamarband, a word literally meaning ‘waist-band’ was worn by Indian men for all occasions, not just formal events, and was a colorful and somewhat flamboyant addition to their attire. The British seized on this local fashion practice, and the formal cummerbund was born; eventually evolving from a sash into a pleated device. As the British imported various goods back to the home island from their colonies, so too did they bring fashion customs with them. Long story short, the cummerbund made its way to Victorian England, where it became a staple of formal men’s attire.

Out about town, that the cummerbund did happen to catch to occasional food crumb at dinner parties, is almost a certainty. After all, you’re chomping down a joint of beast with some nice Yorkshire pudding, and some crumbs get loose; where are they going to go? Yup, those pleats’ll take care of that problem for you. Like it never happened. Just don’t forget to empty them after your evening is through. Now, whether or not, the pleats were designed with this purpose in mind, may never be known for fact. But, what is known is that men did very much use them to hold a receipt say, or a ticket stub from the opera, when the intermission was in. As an interesting side not, the cummerbund does have the added benefit of giving the illusion that a man’s legs are longer and leaner than they really are. I’m just saying…

But, how does one wear a cummerbund, other than making sure that the pleats are up? These days, there are all kinds of cummerbund styles; every color, and conceivable pattern. But, if you’re going to a true black tie event, which color is correct? Black? Should the cummerbund match your tie? Your shirt? As it turns out, there are differing schools of thought on these points. The classical view is that the cummerbund itself may not match the tie (the tie is meant to match the trousers), and should be worn in the limited range of colors permissible with ‘black tie’; black, midnight blue, maroon, and red. In summer weather, your dinner jacket may be white, and in this case the cummerbunds will often match the jacket. In contemporary American use, it’s quite common to see matching ties and cummerbunds in all sorts of colors. This, however, is universally condemned by serious fashion authorities. When I was in the band, ours matched, and were red. And for the years I wore that outfit, no one ever came out of the shadows to serve me with a fashion citation. But, neither did I actually catch any crumbs in mine either.

2 Replies to “The History of the Cummerbund”