The Meaning of Colors in Different Cultures Around the Globe 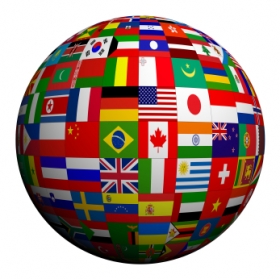 Anyone who travels for business on a regular basis owes it to themselves to learn as much about international business dress as possible. In fact, we often receive e-mails from customers asking us how to dress for a certain business meeting or job interview. This inspired us to create an entire series titled Business Dress Around the Globe. While business attire is generally similar (suit, dress shirt, and necktie), it is usually the business etiquette and the clothing colors that differ the most from one culture to another.

As one might expect, colors often come along with different connotations depending upon geographical location, with certain colors even being offensive in particular areas of the world. Understanding the meaning of colors throughout the world can help you to streamline your ensembles and form lasting business relationships, and should never be underestimated. Consider the following information, all of which can help to steer you in the right direction the next time you set out to travel.

China
A lot of people find that color connotations in China tend to differ a bit from those in many other parts of the developed world. For example, red is often associated with fortune and good luck in the country, unlike in America and Europe. Black is the color of trust, which is perhaps why it is so often worn in Chinese business culture. White is actually the color of mourning in China, and is rarely worn on its own. Finally, the color purple tends to be associated with excessive spending, and is sometimes considered rude for wearing in certain situations. Keep this in mind when dressing for a business meeting in China. Avoid purple ties and white ties, and stick to the “Politicians look” of charcoal or black suit, white shirt, and ruby red necktie. For more information, you might also want to check out our article titled “Chinese Business Dress Etiquette“.

Japan
China and Japan are similar to a certain degree in terms of color connotations; both view white to be the color of mourning, for example. That said, the country has its own set of connotations happening as well. Green, for example, is symbolic of technology, which is why high-tech companies often incorporate the color into their logos. Red tends to be associated with anger and danger, with yellow being the color of courage and refinement. Black in Japan is often associated with mystery, and is commonly worn as part of business culture. Our tip when dressing for a business meeting in Japan: wear a midnight blue suit, white shirt, and yellow necktie. Fore more dress tips, please also have a look at our article titled “Japanese Business Dress Code.

India
Color connotations are taken very seriously in India. Red is the color of purity and love, and is a very large part of wedding ceremonies. The color is also indicative of wealth and power unlike in other parts of the world. Yellow is a sacred color in India, and is also associated with commerce. Unlike in other countries, purple is associated with somberness in India, and is thus worn sparingly. White has a double-meaning, in that it signifies both purity and mourning.

Europe
While color connotations can differ between European countries, they tend to be somewhat relative to one another. Red tends to be considered a “power color,” and is thus often incorporated into business ensembles (red ties are popular especially in Politics). Yellow and lively oranges are happy, and joyous colors that is commonly worn in casual situations. Green is the color of wealth, and also comes along with connotations of nature. Blue is both peaceful and masculine, although dark blue can convey feelings of depression. Finally, purple is indicative of wisdom and royalty; especially in England. Maybe that’s why British prime minister, David Cameron, chooses the purple tie as his favorite neckwear.