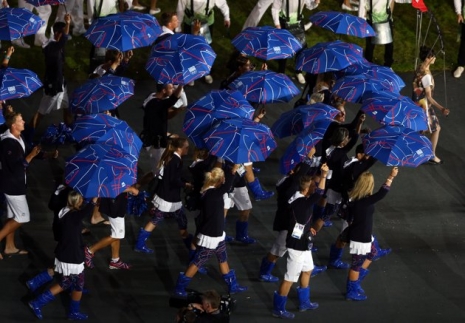 Patterned Umbrellas
Let’s face it; the Czech Republic was trying to make a statement with the way they dressed for the 2012 London Olympics opening ceremony. While they were likely trying to show solidarity by parading around with patterned blue umbrellas, however, all they really did was cause a fashion disconnect. The pattern on the umbrellas looked as if it was pulled straight out of 1993, and was loud and unattractive to say the very least. Featuring a mishmash of bold stripes and neon colors, the umbrellas were those which most fashion-forward people wouldn’t be caught dead walking around with on any given day. Props can be effective, but this was nothing less than a joke. The fact that women wore tights featuring this print served to make things even worse, creating a garish, clashing appearance.

Matching Rain Boots, Really???
If it wasn’t bad enough that the Czech Republic decided to parade around with gaudy umbrellas, they had to choose to wear matching rain boots to make matters worth. The neon-blue rain boots were no doubt a tribute to the weather that is often seen in London, but it just simply did not work. It would’ve been much more effective if the Czech Republic had ditched the umbrella/rain boot combination and simply gone with the relatively attractive “university look” that served as the base of the ensemble. Nevertheless, it should stand to reason that sometimes people simply try too hard to draw attention to themselves. The look did very little to define the culture of the Czech Republic, and was more of a caricature of GB’s fashion/culture than anything else.

Takeaways for the Modern Man
The unattractive aspects of the Czech Republic’s look at the 2012 London Olympics opening ceremony are difficult to argue with, but it comes down to the fact that the loud accessories were exactly what caused the issue. Accessorizing in the correct manner can be quite effective, but taking the wrong route does nothing to help push one in the right direction. As a result, you should be quite careful to ensure that the accessories you choose aren’t nearly as loud and brash as the umbrella and rain boots seen here. Also, avoid clashing seasonality. Wearing summer shorts with rain boots is a perfect example of what-not-to-do.